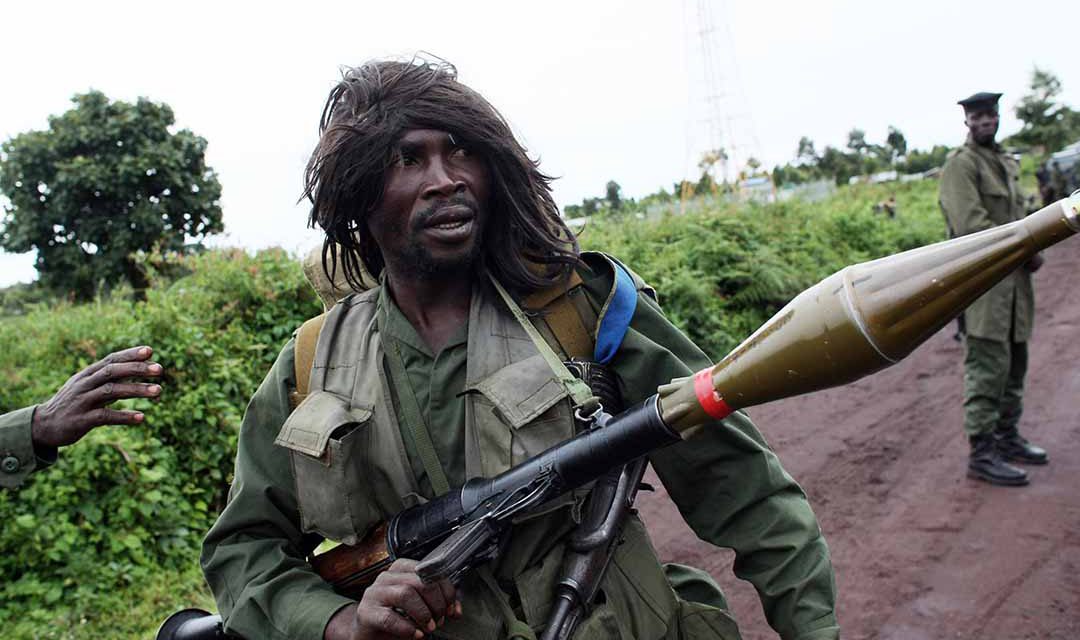 Despite an arms embargo, a constant flow of weapons into the DRC from around the globe ensures that peace remains elusive 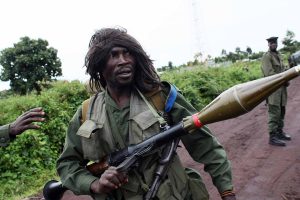 A Congolese army soldier carries a rocket-propelled grenade launcher as he walks up a road leading to the frontline on the outskirts of the provincial city of Goma in November 2008. Photo: YASUYOSHI CHIBA / AFP

Since the withdrawal of foreign troops in 2003, the Democratic Republic of Congo (DRC) has been categorised as a “post-conflict nation”. Yet, a low-intensity war is still raging in eastern Congo and despite a UN arms embargo the flow of weapons continues unabated. In the Kivu provinces alone, over the June 2017-June 2019 period, 1,900 civilians were killed and 3,300 others were kidnapped, Human Rights Watch (HRW) and the New York University-based Congo Research Group reported in August 2019. Accordingly, some 3,000 violent incidents by more than 130 armed groups were recorded during the period. Dozens of other groups are also active in the Ituri, Upper-Uele, Tanganyika and Kasai provinces.

The main armed groups are the Ugandan led Allied Democratic Forces (ADF) and the Democratic Forces for the Liberation of Rwanda (FDLR) in addition to a myriad of Congolese Mai-Mai groups, some of which are supported by the Congolese and Burundian governments, says HRW. These groups are proliferating despite the UN arms embargo. On 28 July, 2003, UN Security Council Resolution 1493 imposed an embargo covering arms supplies and military assistance to all armed groups operating in the eastern DRC. The embargo was imposed in reaction to continued violence in Ituri and North and South Kivu after the withdrawal of foreign armies from the country the year before.

In March 2008, UN Security Council Resolution 1807 lifted all restrictions on arms transfers to the DRC government but required the notification of such shipments to the Sanctions Committee, while the embargo on supplies to non-governmental forces remained in place. Such measures are currently in force. Yet, results have been limited on the ground. Despite the embargo, and after the symbolic destruction of 100,000 firearms in Kinshasa on 21 August, 2010, 300,000 small arms were still in the hands of civilians in eastern Congo, as reported at the time by the Brussels-based Information Group on Peace and Security ( GRIP).

Enforcement of the embargo is problematic because rebels from the government’s Armed Forces of the Democratic Republic of Congo/ Forces armées de la République démocratique du Congo (FARDC) manage to buy weapons despite it, explains Jean-Jacques Wondo, an expert and analyst on DRC security issues. Criminal networks are providing ADF rebels and other groups with arms, ammunition and uniforms bought from corrupt FARDC soldiers. In 2012, according to a UN Security Council report, a network led by (FARDC) General Jean-Claude Kifwa supplied Russian-made AK-47 rifles, rocket propelled grenades and mortars as well as Belgian MAG machine guns and ammunition to the Mai Mai Morgan, in the Province Orientale.

According to Wondo, the current FARDC Deputy Army Chief of Staff, Gen Gabriel Amisi, aka Tango Four, now under EU sanctions, is also supporting some rebel groups. It would appear that the strategy of senior officers in the region includes maintaining a certain level of conflict by arming rebels. The aim is to justify additional budgets for military operations, including danger money paid to the soldiers and fuel, which are siphoned off by these officers for their own benefit, explains Wondo. In September 2018, Gen-Major Jean-Luc Ijila Yav, then in charge of logistics for the FARDC, was jailed in Kinshasa following charges of embezzling ammunition and fuel, says Wondo.

On 1 March, 2018, Radio France Internationale (RFI) reported that ammunition used by the FARDC and the rebels sometimes came from the same stockpiles. The French radio report said that since 2013 several armed groups, including the FDLR, the Nyatura Mai Mai and the Patriots Alliance for a Free and Sovereign Congo, were equipped with ammunition for the AK-47 manufactured by the China North Industries Corporation (Norinco). Curiously, the radio station reported, this ammunition came from the same stockpile as the bullets fired by a policeman that killed a demonstrator on 25 February, 2018 in Mbandaka. RFI also noted the coincidence that Chinese ammunition used during the repression of demonstrations against Kabila’s third presidential mandate in January 2018 in Kinshasa belonged to the same stockpiles as those used by the ADF rebels.

Rebels have also captured weapons from the FARDC, as in October 2008 when the Rwandan-backed National Congress for the Defence of the People (CNDP) looted a FARDC military depot in Rumangabo (North Kivu) and seized large quantities of weapons. Armed groups also obtain weapons and ammunition from neighbouring states. James Bevan from the UK-based NGO Conflict Armament Research says that the Sudanese government has supplied ammunition to the DRC, a substantial amount of which was also acquired by M23 rebels, including Russian-made 2.7 x 108 mm cartridges used by the FARDC. According to a 2012 UN Security Council report, Rwanda violated the UN arms embargo by supplying arms and ammunition to the M23 group, which also procured 12.7 mm machine guns and ammunition for AK- 47s, RPGs and mortars from the Ugandan People’s Defence Force (UPDF).

FRPI rebels in Ituri Province also bartered gold for weapons with a UPDF officer. Weapons from all sorts of origins end up in rebel hands. On 16 October, 2006, Amnesty International, Oxfam International and the International Action Network on Small Arms found that rebels in Ituri were using sniper rifle bullets manufactured by the Federal Cartridge Company in the United States and 7.62 mm cartridges manufactured by the Pyrkal Greek Powder and Cartridge Company. The same company also exported ammunition to Sudan and Uganda, two countries that are among the sources of origin of weapons found in rebel hands. South African 5.56 mm R4 assault rifles sold to the Rwandan Armed Forces (FAR) before the 1994 genocide were also found in rebel hands, say UN investigators.

Serbian arms, such the 7.65 mm Zastava Model 70 self-loading pistol, were also found in Ituri in 2006, after they were delivered from Belgrade to Kigali, says Amnesty International. Prior to that, in 2004, an armed group in Bukavu were found in possession of Serbian anti-personnel mines and mortar shells, while in September 2003, the UN says, most of the weapons recovered from the UPC militia in Ituri were 3,000 Kalashnikov rifles and corresponding ammunition from China and Russia. Rebels also get supplies from other armed groups. According to the UN Security Council report of 2012, the M23 supplied weapons and ammunition to the Raia Mutomboki Mai Mai. Since the FARDC have also been accused of many human rights violations, the supply of arms to the DRC government, even if does not violate the UN embargo stricto sensu, risks stoking the fires of repression against the Congolese.

In 2016, DRC arms imports amounted to $43 million, but the amounts vary considerably from one year to another (for example, $151 million in 2010 and $2 million in 2015). According to Wondo, most of the weapons are stockpiled in the Kibomango and Mbakana camps, near Kinshasa. Only the police and the Republican Guard, which remains faithful to the former president, Joseph Kabila, have access to these weapons. The DRC has a large range of suppliers. The FARDC use Belgian-made FN FAL and FNC rifles and MAG machine guns, US-made M16s and Israeli-made Galil rifles. Russia remains one of the main suppliers with 7.62×39 mm AK-47s or the cheaper AKM-59 version, RPD light machine guns and PKM general-purpose machine guns (7.62×54 mm).

Currently, the FARDC are equipped with 20 T-54 and T-55 tanks, 48 T-62 tanks, about 100 howitzers of various calibres, 107 mm and 122 mm rocket launchers and as many mortars. Russia sold four Sukhoi SU-25 airfighters, MI-24 Hind combat helicopters and Mi-17 helicopters to the DRC as well as Zhuk patrol vessels for the Congolese navy. Besides, according to Wondo, in July 2015 the Republican Guard acquired from Russia T-80 M tanks, new-generation rocket launchers and ground-to-air S-300 missiles. According to the FARDC logistical services, in December 2017 the former chief of staff of the presidency, General François Olenga, purchased several Iliouchine 76 Candid and Antonov 124 Condor transport aircraft from Russia. These weapons were airlifted from Sebastopol in Russian Crimea to Kisangani between December 2017 and January 2018.

Other shipments were made by sea to the ports of Matadi and Boma. Moreover, on 23 May, 2018, Russia and the DRC signed a military cooperation agreement that included a weapons sales deal. According to Wondo, on several occasions weapons for the Republican Guard were supplied discreetly via the port of Banana without notifying the UN Mission for the Stabilisation of Congo (MONUSCO). Another important supplier is Ukraine, which, in addition to 25 T-64 tanks, has sold 50 T-55 tanks to the DRC in the past decade. In December 2015, a Congolese official delegation led by General Olenga travelled to Kiev to purchase more weapons. More recently, in early 2018, the Beltech Export company from Belarus supplied four L-39 C aircraft to the Congolese air force; prior to this the FARDC had procured Sukhoi-25K and Sukhoi-27 flanker C aircraft from Beltech.

Over the years, China has also become an important source of supply. The list includes Type 56 rifles, which are China’s version of the Russian AK-47 assault rifle RPGs, about 30 T-59 tanks and one Shanghai II patrol vessel for the Congolese navy. In 2018, the Chinese Technology Company supplied 10 Phantom DJI drones for the observation of Kinshasa, Lubumbashi and Goma. Serbian-made Zastava M92 rifles are also used by FARDC troops. The Yugoimport-SDPR company supplied Premax-39 and Nestin-class river patrol vessels at the end of 2017, which were used in an assault against the Yatkutumba Mai Mai on Lake Tanganyika in November of that year. Another company called CPR Impex Doo supplied 22,000 5;56 mm M-92 assault rifles and 120 20 mm M-55 anti-aerial guns to the Republican Guard.

In 2018, the Serbian company Privi Partizan also delivered, via the ports of Banana and Matadi, about five million cartridges for various assault rifles and for machine guns. The FARDC are also equipped with 90 AML-60 French Panhard reconnaissance armoured vehicles and 60 Panhard M3 armoured personal carriers. The air force has five Mirage 5 airfighters and Puma, Cougar and SA316 Alouette III helicopters, in addition to 12 Cessna 150 and three Cessna 310 transport aircraft. The long list of suppliers to the DRC includes Spain, which sold three Piraña patrol vessels to the Congolese navy; Brazil, which sold 19 Cascavel armoured cars; and Switzerland, which has supplied 9K32 strela-2 Rapier ground-to-air missiles. Egypt has been a provider of Misr assault rifles, used by the FARDC infantry, which are a copy of the notorious Russian AK-47, and of 20 Fahd armoured person carriers, which were delivered around 1990.

Military observers have said that a large proportion of the tanks, vessels and aircraft are not operational. One of the most controversial DRC deals has been North Korea’s secret supply in 2014 of pistols to the FARDC and to the Congolese National Police. According to an official UN document seen by Reuters news agency, North Korea also sent instructors to provide training for the Presidential Guard. This deal violated the arms embargo imposed on North Korea by UN Security Council Resolution 1874 of 2009. It also violated the arms embargo on the DRC, which requires member states to notify the Security Council Sanctions Committee of arms sales or training to the Congolese army, as stipulated in UN Security Council Resolution 1807.

Finally, the FARDC has also received domestic supplies from local manufacturer Afridex in Likasi (upper Lualaba Province), which produces AK-47 rifles and ammunition with the technical assistance of the Chinese company Norinco. According to Wondo, who claims to have accessed a confidential army report from the FARDC army chief of staff in 2016, some of the Afridex weapons and ammunition were diverted by military officers to supply local armed groups such as the Bakata Katanga militias. 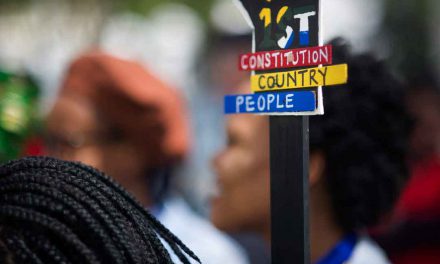