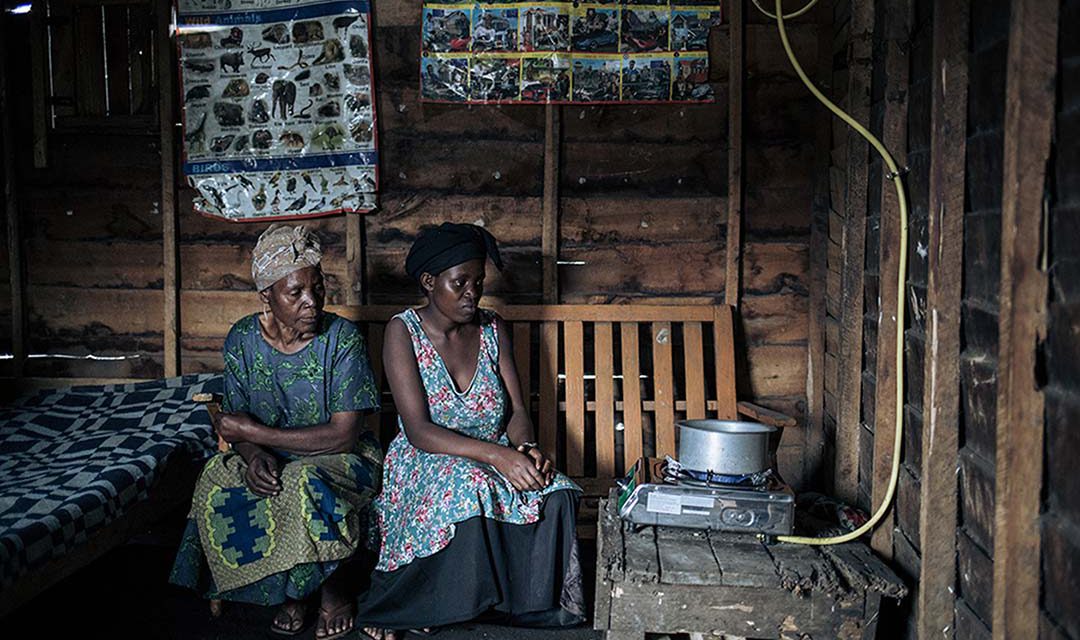 Africa’s rural poor are reliant on biomass for cooking and heating, exposing them to high levels of pollutants

As COVID-19 wreaks havoc across continents, an unfashionable killer silently and stealthily chokes the life out of thousands of poverty-stricken women and children in Africa and south-east Asia.

The World Health Organization (WHO) estimates that in sub-Saharan Africa alone, 600,000 people lose their lives every year from indoor air pollution. Beyond these staggering numbers are the faces of women and children who bear the burden of indoor air pollution, from cooking and lighting. 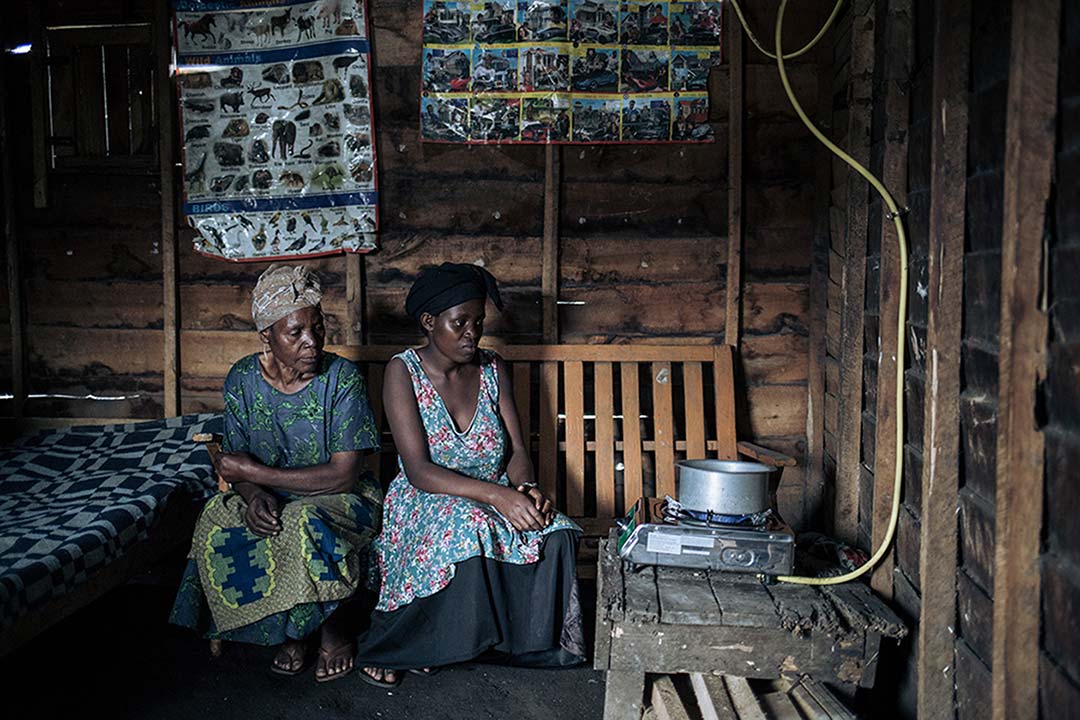 Two beneficiaries of a WWF (World Wildlife Fund) pilot project to produce domestic bio gas to combat illegal charcoal production look at their new gas cooker in their home in Sake, northeastern Democratic Republic of Congo, on September 28, 2019. – In North Kivu province, charcoal production is one of the main threats to the conservation of Virunga National Park and its trade is an important source of income for armed groups. (Photo by ALEXIS HUGUET / AFP)

Indoor air pollution is the norm where firewood and charcoal remain a popular choice of fuel amongst households. The UN Environment Programme estimates that wood fuel and charcoal alone account for 40% of energy use in Africa. These glaring statistics have contributed to a mushrooming of enterprises and job creation but also deforestation and a health hazard that is an invisible killer among populations.

In fact, according to a May 2019 report by international development aid agency Hivos, cooking with charcoal and firewood sources still accounts for four million premature deaths a year, and puts significant strain on already stressed forest resources. It is also the single largest source of greenhouse gas emissions (GHGs).

Africa’s energy poverty index, now at 620 million people with no access to electricity according to the International Renewable Energy Agency (IREA),  is a social and economic tragedy inhibiting development.

In Kenya, an over-reliance on biomass led to environment legislation in 2018 placing heavy restrictions on cutting down trees and charcoal production but which, unfortunately, has had little effect on reducing indoor pollution.

The United Nations Environment Programme (UNEP)’s George Mwaniki says indoor air pollution causes an estimated 4,000 premature deaths every year in Zimbabwe alone. “Wood is the main fuel used for cooking and heating and accounts for 64% of the energy mix in Zimbabwe,” Mwaniki says. “In rural Zimbabwe, 80-90% of people are heavily dependent on wood fuel, and they light their homes with kerosene.”

The WHO says the majority of households that use solid fuels burn them in open fires or simple stoves that release most of the smoke into the home. 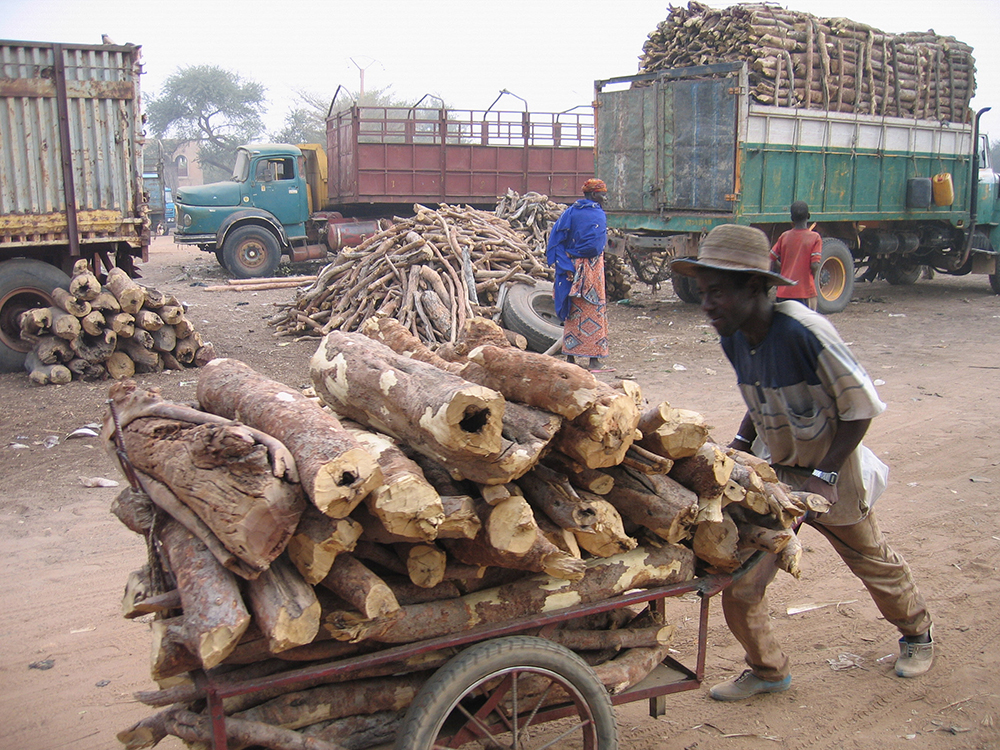 Wood from the last forests in south-western Niger are loaded up for delivery. In this immense and mostly desert country, people continue to decimate forests for heating purposes. Photo: Boureima Hama/AFP

Leah Lunga has few options when it comes to preparing meals. “We use charcoal for cooking as there are now no trees for wood in our area,” Lunga, who lives with her daughter-in-law and three grandchildren, said from her one-roomed house in Epworth, some 25 km east of the capital, Harare. “We buy our charcoal from traders who import it from Zambia, as it burns longer but has more smoke. I already suffer from breathing problems, but I am sure I will survive.”

As observed by Curtin University professors Krassi Rumchev and Jeff Spickett et al in a study titled ‘Indoor air pollution from biomass combustion and respiratory symptoms of women and children in a Zimbabwean village’, published in 2007, the rural areas of developing countries are particularly reliant on biomass for cooking and heating, exposing them to high levels of pollutants associated with a range of respiratory symptoms. Exposure to this pollution heightens the risk of childhood pneumonia and contributes to lung cancer, strokes, heart disease and pulmonary ailments.

The study investigated domestic exposure to carbon monoxide (CO) and respirable particles (RSPs) in association with respiratory symptoms among women and children in 48 households. It found that indoor levels of CO and RSPs exceeded WHO air quality guidelines in more than 95% of kitchens. Almost all the women (94%) had respiratory symptoms, while the figure was 77% for children.

“Clean”, more fuel efficient cookstoves have been identified as one of the four key domains for global investment, with a particularly strong potential to transform the lives of girls and women.

Girls and young women who cook over fuel-efficient stoves will spend less time gathering fuel and cooking food, which gives them more time to pursue educational and work opportunities. Other direct benefits of switching to fuel efficient cookstoves include safety: girls and women are less exposed to the risk of physical and sexual violence, a reality when they are forced to scavenge for firewood.

A collaboration between UNICEF and GOAL – an international humanitarian response agency established in Ireland more than 40 years ago, which supports Zimbabwe’s rural poor – has piloted the use of fuel efficient cookstoves as a cleaner and environmentally friendlier method of cooking.  More fuel-efficient stoves are not only healthier than open wood fires, they also mean women spend less time collecting firewood and cooking. To date, UNICEF says it has reached more than 3,000 households with this programme.

However, a 2016 Hivos/World Future Council report points out that while more efficient stoves remain an important interim solution that has delivered impressive results in certain countries, they are not a long-term or truly sustainable solution to the challenge of cooking. As an alternative, clean cooking technologies must be “environmentally, socially, as well as economically sustainable to be considered truly sustainable in the long-term”.

One alternative, biogas – the process of producing energy by fermenting waste – is gaining in popularity around the world as a way of reducing reliance on fossil fuels, cutting deforestation and providing cheap, reliable and easy-to-produce local energy. It has proved an attractive alternative in rural areas, beyond national power grids, where animal dung is plentiful, but firewood is becoming harder to access.

Despite the benefits, a $3 million project to roll out biogas across Zimbabwe, set up by the government in partnership with development organisations SNV and Hivos International, has had a low take-up in most rural areas. Over the past five years, about 40 digesters have been built on farms and at institutions, along with about 250 home units – well short of the project’s aim of 7,400 home digesters by 2020.

“Biogas is cleaner energy compared to charcoal,” says Wimbiso Simbi, an environmental specialist with the Southern African Research and Development Centre. “The generation of biogas reduces the soil and groundwater pollution as it diverts waste from landfill, and leads to improvements in the environment, sanitation, and hygiene.”

On the wider continent, the Africa Biogas Partnership Programme (ABPP), launched in 2009, initially had a target of providing more than 500,000 people with access to clean biogas energy. Implemented by Hivos East Africa and SNV, ABPP’s story has been simple: building a commercially viable market for the adoption and upscale of biogas in countries that have been most affected by climate change.

In response to emailed questions on the status of the programme, the ABPP’s director, Wim van Nes, said: “ABBP was terminated by the end of March 2020. But a total of 72,354 household digesters have been installed under this programme, providing access to biogas (clean energy) and bio-slurry (potent organic fertiliser) to about 362,000 people.”

The stories from this initiative have been encouraging: Burkina Faso’s government is leading an alliance in West Africa to have countries in the Sahel region adopt biogas for clean cooking; in Uganda, Tanzania and Ethiopia, bio-slurry has been commercialised as a significant component of organic farming, while Kenya has become a leader in providing an enabling environment where the private sector can partner with government to uphold quality standards in the maintenance of biogas plants within households.

While it is difficult to change existing behaviours, and clean stoves are often abandoned in favour of traditional methods, there is now growing support for clean cookstove projects that have the potential to help save hundreds of thousands of lives. 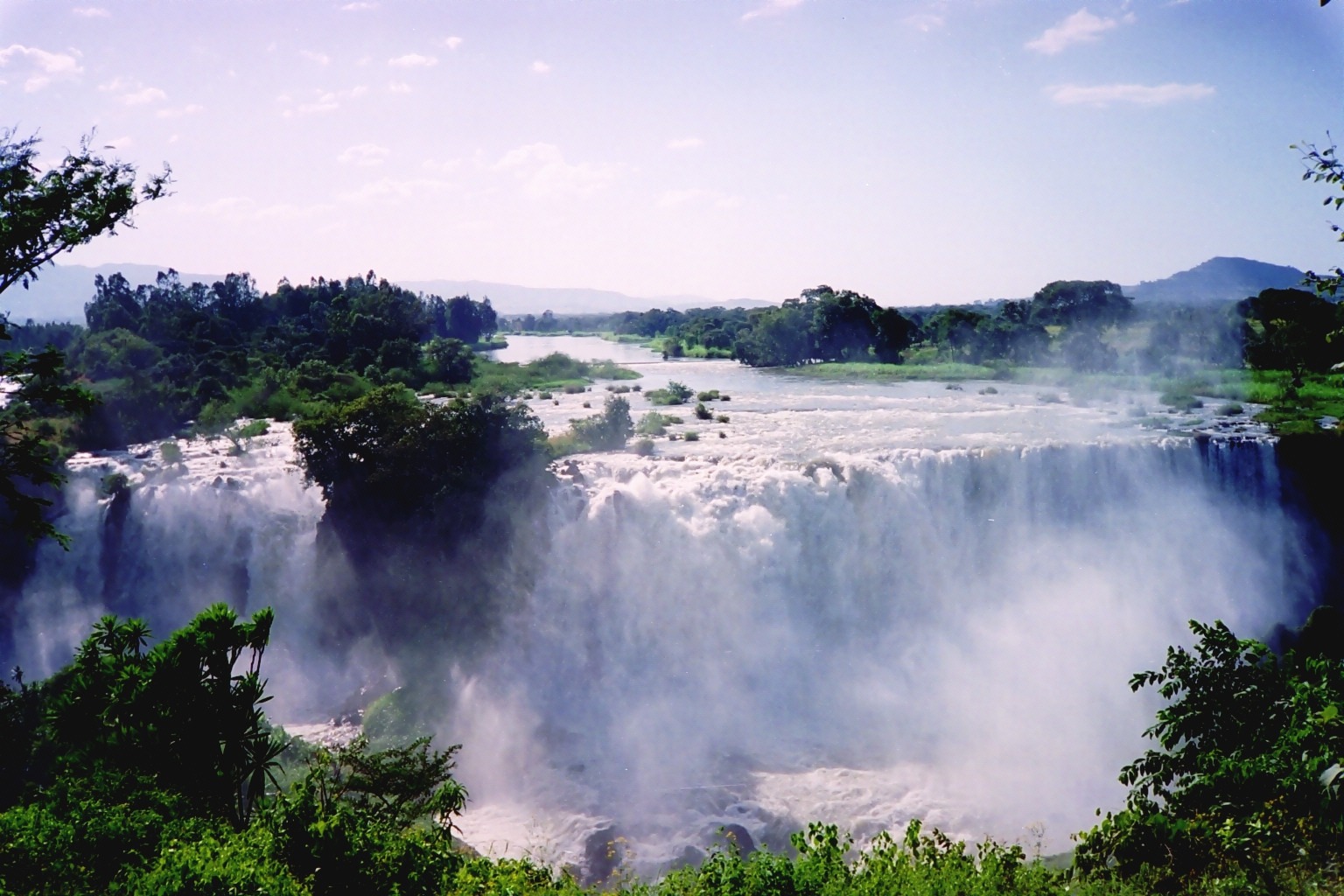 A powerhouse for regional integration

Power for the people