Climate change has the potential to undermine and even undo progress made in improving the socioeconomic wellbeing of many African countries. The negative impacts associated with climate change are compounded by many long-standing factors that challenge the continent, including widespread poverty, disease, and high population density, which is estimated to double the demand for food, water, and livestock forage within the next 30 years.

Claudia Ringler, a senior researcher at the International Food Policy Research Institute (IFPRI), says there is a direct link between climate change and extreme climatic events, such as droughts and food shortages.

“While climate variability has always been with us, a growing share of droughts and other extreme events, even including cold spells, are directly due to man-made or anthropogenic climate change,” Ringler says. “There is no doubt that adverse climate change impacts are growing in intensity and frequency. Average global surface air temperatures in 2020 were about 1.25°C above the average for 1850-1900 and 20 of the last 21 years were the hottest recorded years in history.”

The Intergovernmental Panel on Climate Change (IPCC) has projected that if greenhouse gas emissions, the leading cause of climate change, continue to rise, mean global temperatures will increase 1.4 – 5.8°C by the end of the 21st century.

The countries of eastern Africa – Kenya, Tanzania, Rwanda, South Sudan, Uganda, and Burundi – are prone to extreme climatic events such as droughts and floods. In the late 70s and 80s, droughts caused widespread famine and economic hardship in many countries of the sub-region.

Now, there is evidence that future climate change will lead to alterations in the frequency or severity of such extreme weather events, worsening their impact.

In addition, future climate change will lead to increases in the rise of average mean temperatures and sea levels, and changes in annual and seasonal rainfall, affecting agricultural production, public health, the availability of water, energy use, bio-diversity and ecosystem-dependent services (including tourism).

“In low- and middle-income countries, like the East Africa region, mitigating food security impacts from climate change is front and centre and will require major changes and investment in many areas,” says Ringler. “Despite the difficulty of determining the precise impacts of climate change on future agricultural productivity and food security, the broad consensus is that food supplies will shrink.

“Production will be impacted most in rain-fed systems, which is the most common agricultural system in sub-Saharan Africa, including East Africa. It will be less and less certain when rainfall arrives.”

As a result, farmers might need to plant seeds more than once when rain fails, increasing production costs and overall yields; production will be lower, and plants and animals will be more affected by disease because of hotter weather.

Among populations in East Africa, says Ringler, the poorest will be hardest hit, because they spend 40% – 60% of their income on food (four to five times more than do average consumers in rich countries). Globally, an additional 80 million people will be at risk of hunger because of the effects of climate change – adding to the estimated 690 million people (or nearly 10% of the global population) that were already undernourished in 2019.

“Despite the clear linkages between climate shocks, such as droughts, and food shortages, the recently completed climate change conference in Glasgow did not focus on the need to support agriculture and the food security needs of poorer populations, including countries in East Africa,” says Ringler.

“While rich countries now understand that they are also affected by climate change – from forest fires, floods, and heat waves – there is yet no global understanding that climate change is an existential threat to poorer populations, and particularly poorer rural populations in low- and middle-income countries.”

So, what needs to be done to reduce climate change impacts on food security and nutrition?

Dr Patrick Verkooijen, the CEO of Dutch foundation Global Center on Adaptation, believes that adaptation is crucial for Africa and that successfully doing so will bring enormous benefits.

“Accelerated efforts to combat the causes of climate change must be matched by efforts to deal with its consequences, as these impacts will only grow more intense as the planet continues to warm,” Verkooijen says.

“Our climate emergency affects us all, but the warning light is flashing most urgently for Africa. Even before the social and economic trauma inflicted by the COVID-19 pandemic, African nations already faced a long list of challenges from high rates of poverty and rising food insecurity [due to] unplanned rapid urbanisation, increasing water scarcity, ecosystem loss and desertification, and a lack of decent jobs to meet a growing population.”

Jean-Paul Adam, the director of Technology, Climate Change and Natural Resource Management Division at the United Nations Economic Commission for Africa (UNECA), says: “African countries are focusing their efforts on getting increased support for adaptation because they are feeling most directly the impacts of extreme weather events, including flooding and droughts. 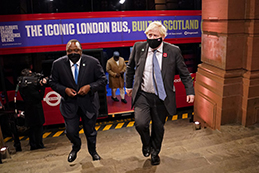 Britain’s Prime Minister Boris Johnson (R) arrives with Kenya’s President Uhuru Kenyatta (L) on an electric bus with other leaders and attendees for a reception to mark the opening day of COP26 on the sidelines of the COP26 UN Climate Change Conference in Glasgow, Scotland in November  2021. Photo: Alberto Pezzali /AFP

“Food insecurity increases between 5% and 20% with each flood or drought that occurs across the continent. African countries also have the least capacity to be able to respond quickly to these events when they occur.  By focusing efforts on interventions that improve resilience and adaptation, the costs of such disasters can be dramatically reduced.”

These may include nature-based solutions, where natural environments may be rehabilitated, with opportunities to generate significant livelihoods at the same time.

“Recent studies by ECA have demonstrated that investment in nature-based solutions such as agro-forestry or reforestation can generate significant returns, both in terms of value addition and job creation,” Adam says. “But the most significant impact may be to reduce future costs.”

Ringler points out that to fight climate change, Africa needs to accelerate breeding crops that can withstand climate change and associated diseases through sustained support to agricultural research and development, as well as breeding to increase the nutritional value of crops.

Given the growing incidence of extreme weather events, it is also important to keep global food trade routes open, reduce existing barriers, and ensure that countries did not resort to protective measures when climate and other shocks hit.

Ringler notes that low- and middle-income countries already depend on imports, and open trade regimes from more temperate regions to meet current food demands, as agricultural productivity and underlying investments had been lacking for decades.

“Growing trade and food aid to address climate-induced humanitarian crisis is a key solution,” she says, “but food production in richer countries is also affected, and trade alone will not be sufficient to protect poor countries against food shortages caused by climate change.

“In addition to these investments and solutions, we need to do much better in reducing and managing risk options, including improving the access of farmers to sustainable agricultural water supplies for food production, nutrition and resilience; putting clean energy access within reach of everyone; extending climate advisory services and social safety nets to those most affected by adverse climatic events; all while improving, in parallel, ecosystem health, which is essential to retain key ecosystem functions that underlie our food systems.”

But, she warns, none of these was geared to dramatically lower emissions, as these were not generated in the poorest countries but rather in the Global North, as a result of fossil fuels in industries, energy and transport, the over-consumption of meat products and the generation of large amounts of waste, including food waste, all of which contributed to climate change.

“While we have lost the race to a 1.5-degree world, we can still dramatically slow growth in emissions and reduce adverse impacts on food and livelihood security of the poorest. Let’s act now!” she says.

Building household resilience and improving coping mechanisms could also significantly reduce the risk of food insecurity. Household surveys by the International Monetary Fund in Ethiopia, Malawi, Mali, Niger and Tanzania found, among other factors, that broadening access to early warning systems and to information on food prices and weather (even with simple text or voice messages to inform farmers on when to plant, irrigate or fertilise, enabling climate-smart agriculture) had the potential to reduce the chance of food insecurity by 30%. 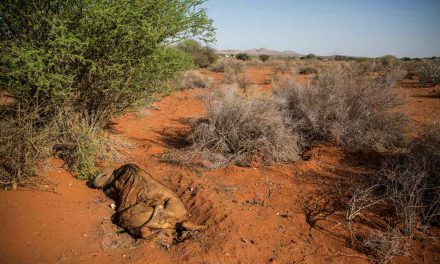 Democracy in Africa: Enter the dragon 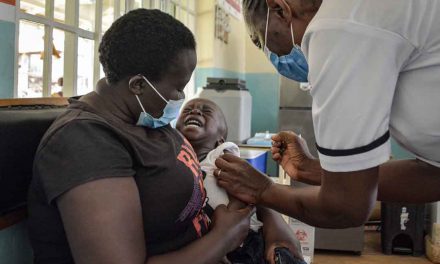 Steady progress at a slow rate