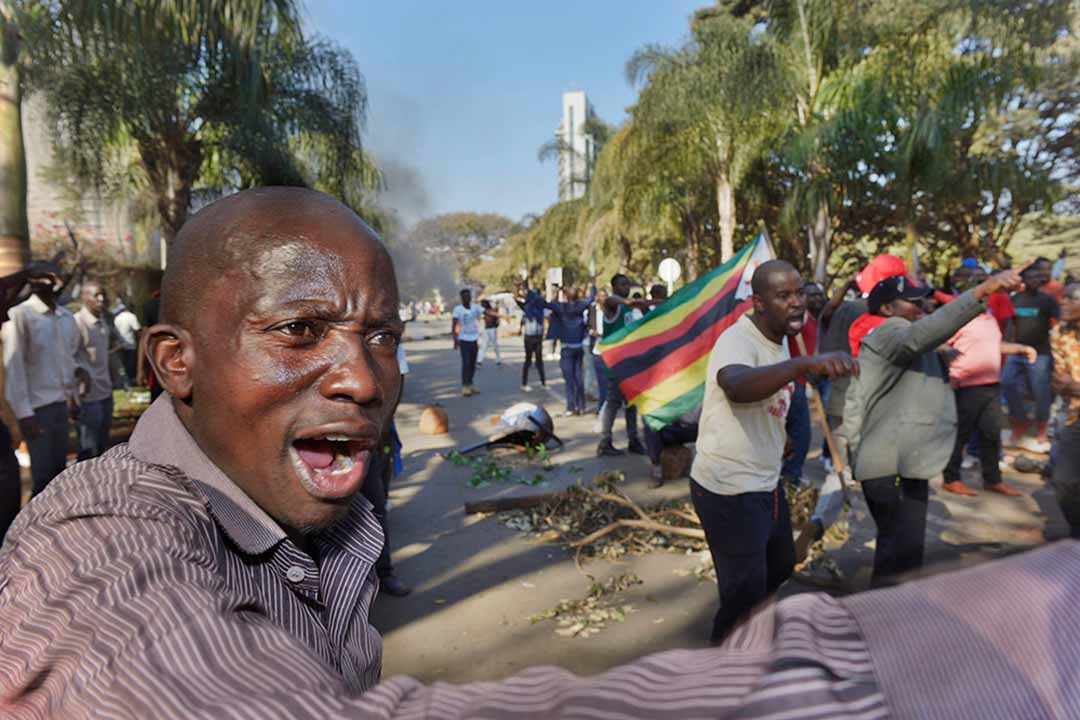 By mid-morning on 1 August 2018, thousands of people had gathered in Harare’s central business district (CBD). Just two days before, the country had gone to the polls to elect a new government, after the ouster of former President Robert Mugabe in a military coup in November 2017. It was a highly unusual demonstration of popular sentiment in a country that has seen a great deal of state repression.

But on that day, Zimbabweans in their thousands were protesting against alleged vote rigging by the Zimbabwe Electoral Commission (ZEC) to ensure ZANU-PF candidate Emmerson Mnangagwa won the election. Senior MDC Alliance leaders, among them the then People’s Democratic Party leader – now MDC-A deputy national chairperson –  Tendai Biti claimed that Mnangagwa had lost the election to MDC Alliance candidate Nelson Chamisa.

The sense of growing chaos was, perhaps, the perfect excuse the government needed to show it was firmly in control. As in the past, dissent would not be tolerated. Anti-riot police were deployed. Despite the show of force, the protesting crowd swelled, with some protestors burning vehicles and destroying property.

Soldiers, armed with assault rifles, whips and sjamboks (leather whips), were deployed in the CBD. At the end of the day, six people lay dead on Harare’s streets – some of whom had been shot in the back while fleeing. Many other protesters also had gunshot wounds or other injuries, such as broken limbs. International election observers denounced the “excessive use of force”, urging the police and army “to exercise restraint” and the ZEC to release the results of the election. The election presented an opportunity for Zimbabwe “to break the cycle of electoral contentions and post-election violence”, they said.

But the response of the authorities was not, in fact, new to Zimbabweans, nor was it the assurance they wanted that this time elections would proceed democratically. As before, allegations of vote rigging degenerated into riots, leading to a massive military crackdown. Once again, Zimbabwe had held a disputed election.

Mnangagwa, who had been one of Mugabe’s key enforcers, had promised a clean break from his mentor’s repressive system and vowed to uphold democracy and observe human rights. But he had a problem: his administration was founded by a military-backed coup. He was desperate to attain democratic legitimacy through credible polls. Soon after being sworn into office, and only under pressure from the international community, he established a commission of inquiry to look into the violence.

The commission, which sat between September and November last year, was led by former South African President Kgalema Motlanthe. Appearing before the commission, Biti questioned its credibility, arguing that other members of the commission, international lawyer Rodney Dixon and former Tanzanian Defence Forces chief Davis Mwamunyange, had links with military regimes in Africa, as well as with Vice President Constantino Chiwenga. Biti also said Commissioner Charity Charamba was a member of ZANU-PF and should therefore not be part of the commission probing the party’s alleged election rigging.

The commission was critical of the use of live ammunition against citizens, which it said was “clearly unjustified and disappropriate [sic] … especially as they were fleeing”. It also condemned assaults using sjamboks, baton sticks and gun butts on members of the public. It recommended that the army immediately conduct an audit of its standing orders and procedures for law and order enforcement operations, and produce a public report to ensure that such massacres did not happen again. It also urged government to compensate victims. At the time of writing, nearly three months later, none of the recommendations had been carried out.

But old habits indeed die hard. The ink of the report had hardly dried when the military was at it again. The occasion, this time, was a call for a three day stay away by the Zimbabwe Congress of Trade Unions to protest the government’s decision to increase fuel prices. Many Zimbabweans were already disappointed by the lack of evident reforms. The sudden, and considerable, increase in fuel prices confirmed what many sensed – that the economy was approaching, if such a thing was possible, an even deeper crisis. The government responded by shutting down the Internet and deploying the military in residential areas to crush protests.

A Zimbabwe human rights NGO forum (the Forum), a coalition of 21 human rights NGOs in the country, reported that at least 844 human rights violations had been committed during the crackdown. According to its figures, at least 12 people were killed, some 78 people suffered gunshot wounds and at least 242 people suffered assault, torture or dog bites, as well as other forms of inhumane and degrading treatment. In addition, media reports indicated that several women had been raped by soldiers or police. The Forum also indicated that the crackdown had been accompanied by breaches of human rights including infringements of privacy, the right to freedom of movement, the right of access to information and a media shutdown.

The Mnangagwa administration was simply continuing the ZANU-PF “tradition” of holding sham elections before unleashing the state apparatus on citizens to quash dissent, University of Zimbabwe political science lecturer Professor Eldred Masunungure told Africa in Fact. The glaring shortcomings of the latest election demonstrated that Mnangagwa did not have the political legitimacy to govern, he added.

“Legitimacy is commonly defined in political science and sociology as the belief that a rule, institution, or leader has the right to govern,” according to Ian Hurd in an article on the topic in Encyclopedia Princetoniensis. “When shared by many individuals, legitimacy produces distinctive collective effects in society, including making collective social order more efficient, more consensual, and perhaps more just.”

But legitimacy in this sense has never been a part of the Zimabwean political landscape, and elections have been disputed since ZANU-PF took power after independence in 1980. According to Masunungure, concerns about their legitimacy have become more urgent since the early 2000s.

In the run-up to the 2018 elections, Mnangagwa, who was on a charm offensive to woo the international community, promised free, fair and credible elections. He said he would entrench democracy, uphold human and property rights and introduce economic reforms to promote investment and economic growth. He also promised media and security-sector reforms. “But it appears he has delivered none of those promises,”  Masunungure said. “This laid the ground for a disputed election, hence questions around his legitimacy.”

The ZEC declared Mnangagwa the winner of the polls but the opposition leader, Nelson Chamisa, insisted he had won and challenged the results in the Constitutional Court (ConCourt). The case turned into a dramatic legal battle blighted by questionable decisions, among them the registrar of the court’s refusal to accept evidence critical to Chamisa’s case. The ConCourt declared Mnangagwa the winner but the MDC Alliance rejected the ruling. It said in a statement that the Mnangagwa administration was an “illegitimate regime that used brazen subterfuge and brutal violence to steal the people’s vote”.

Independent observer missions agreed, saying the elections were not credible. They included observers from the European Union (EU), a key economic bloc with which the Mnangagwa administration was attempting to restore normal diplomatic ties. In careful wording, the EU declared that Zimbabwe’s polls “fell short of international standards”. 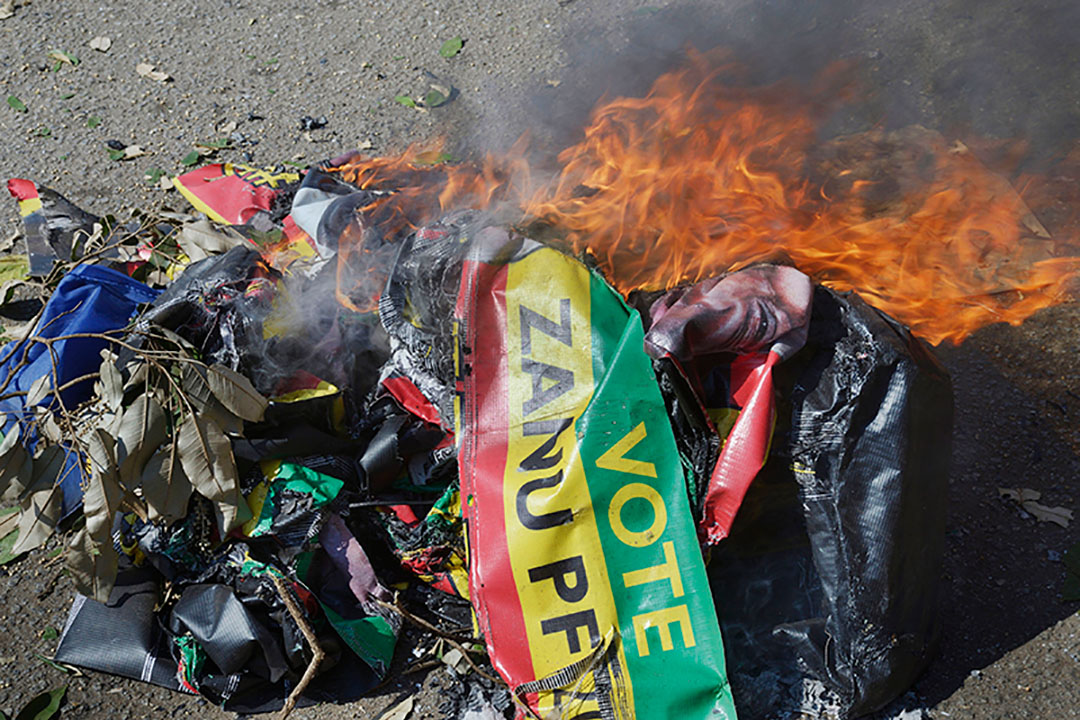 Mnangagwa’s anxiety about his own legitimacy was exacerbated by his own illegal rise to power, according to Dr Ibbo Mandaza, a political analyst and chair of the Southern African Political Economy Series Trust, a regional think tank. “Legitimacy was a big issue because the Mnangagwa regime acquired power through a military coup, which is unconstitutional and therefore illegal,” he told Africa in Fact. “Having failed to acquire legitimacy at the polls, the government decided to pulverise the nation into submission.”

Army bosses and the political elite were seeking to protect their wealth, which they had acquired largely through corruption, Mandaza added. Members of the ruling and military elites had formed cartels which were looting the country’s resources through corrupt deals. Their ability to do so is supported by the ruling party’s patronage culture. Senior politicians and military figures with liberation war credentials are rewarded with top government positions, whether they are competent or not (see Militarisation and masculinity in Zimbabwe by Rekopantswe Mate, Africa in Fact 48).

Over many years, few of the ruling elite, the military elite and their associates have ever been brought to book for their corruption. As a result, corruption has spread to the business sector and into lower levels of society. Corruption is seen as something that pays. Zimbabwe is now considered to be one of the most corrupt countries in the world; it ranked 160 out of 180 on the Transparency International 2018 Corruption Perceptions Index.

“The cartels can be traced back to 1998, when military bosses were involved in looting diamonds in the DRC. The cartels now control the exploitation of minerals and other resources, as well as the fuel sector in Zimbabwe,” said Mandaza. 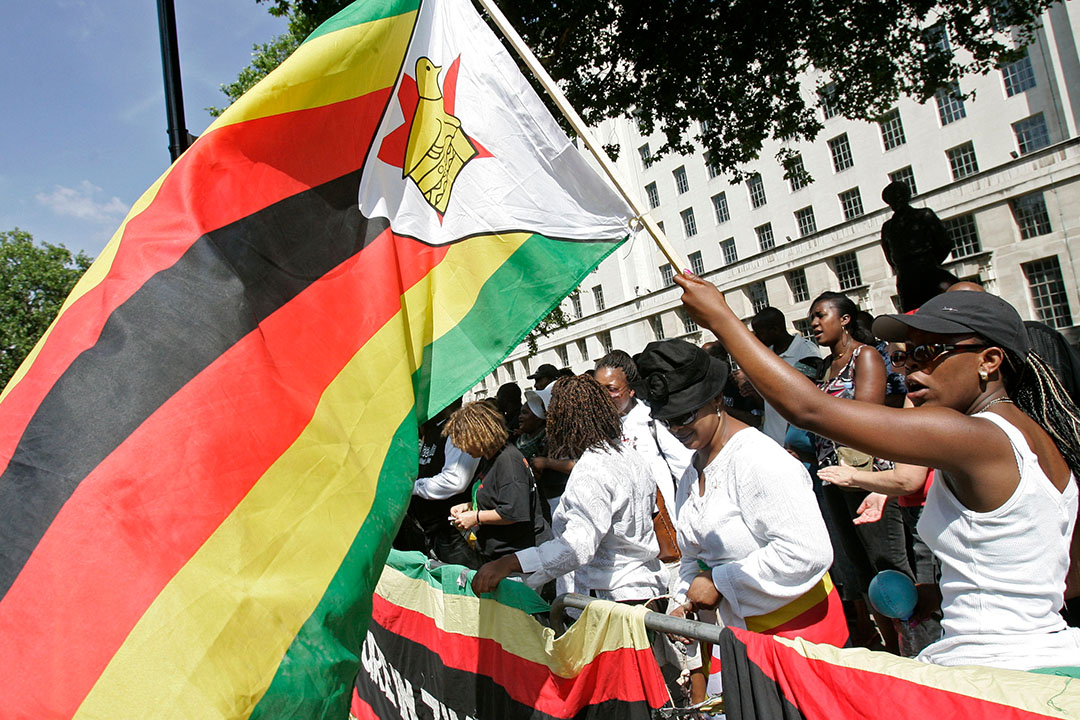 He argued that the actions of regime members were now aimed at achieving only one thing: protecting the fruits of their looting and corruption. “That applies to the 2008 massacres [during which an army crackdown left more than 100 people dead, as reported below],  the rigged 2013 election, the 2018 coup, the August shootings and the crackdown in January.”

While the military has been a key player in Zimbabwean politics since independence, its influence has grown over the years, culminating in the coup which removed Mugabe from power, Mandaza told Africa in Fact. The ruling party’s use of force was in line with a militarist doctrine according to which law and order were maintained by unleashing violence on the populace. In the early 1980s, the military murdered about 20,000 civilians in Matabeleland and Midlands in an operation known by a Shona term, Gukurahundi (the spring rain that washes away the chaff). The army also played a pivotal role in ensuring Mugabe remained in power after he lost the first round of the 2008 elections to the then-opposition leader, the late Morgan Tsvangirai. At the time, the Forum estimated that at least 107 people were killed, while some 19 people “disappeared”, about 137 abducted, there were six politically motivated rapes, some 913 people were assaulted and about 629 displaced. The 2018 state violence involved about 2,532 human rights violations, the Forum said.

Zimbabwe’s violent political culture had left an indelible mark on the population, said Masunungure. “When you live under a draconian system … it leaves a mark. The culture of violence and suppression started with the colonial regime in 1890. Zimbabweans had to undertake a liberation war, which included an armed struggle, to be free. The armed struggle had a psychological effect on soldiers on both sides, as well as the general population,” he said.

After independence, Zimbabweans found themselves having to contend with the psychological effects of an equally autocratic system under Mugabe, Masunungure added. “We are risk averse because we have experienced the consequences of state-sponsored brutality for so many years.” Because of this, protests such as those which occurred in 2016 and 2018 were rare – and were promptly crushed by the state. Zimbabwe now lacked a critical mass of people who were not cowed or awed by the potential risks of politics, he said.

“It’s important, however, to note that we are not born docile,” he said. “It’s something that has been nurtured over generations.” 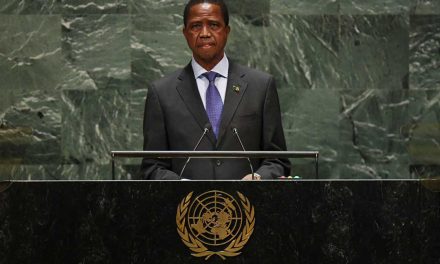