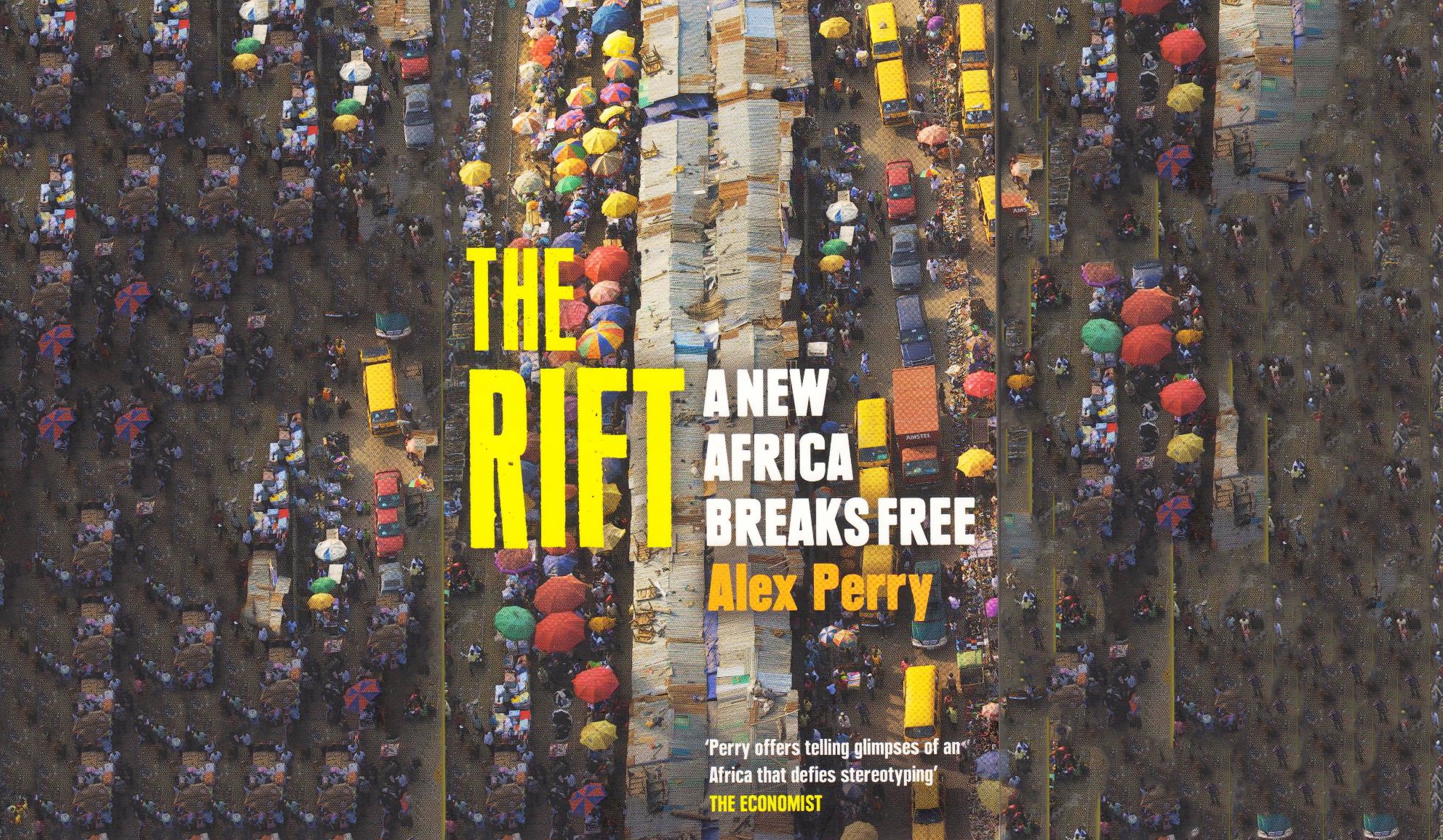 Journalist Alex Perry is a dissident. Not one with a tone of righteous indignation, but a dissident nevertheless, and the story he has to tell in his new book, The Rift: A New Africa Breaks Free (Weidenfeld & Nicolson, London, 2017), is about how Africans are actively and creatively dissenting on their own terms from western impositions of what the continent’s narrative should be, tearing away from threadbare tropes of safaris, famine and dictators to build something truly remarkable.

Perry is excited about the fact of medical supplies delivered by aerial drones in Rwanda today. He is intrigued by the challenges of a scenario in which a Pygmy hunts dinner in dense jungle with bow and arrow while high above passes the executive jet of an African billionaire: “Old African tropes like autocracy and tribalism are mixed in with new ones like cashless economies and solar power. To lions, refugees and sunsets, now add sushi, billion-dollar banks and the world’s biggest telescope.” 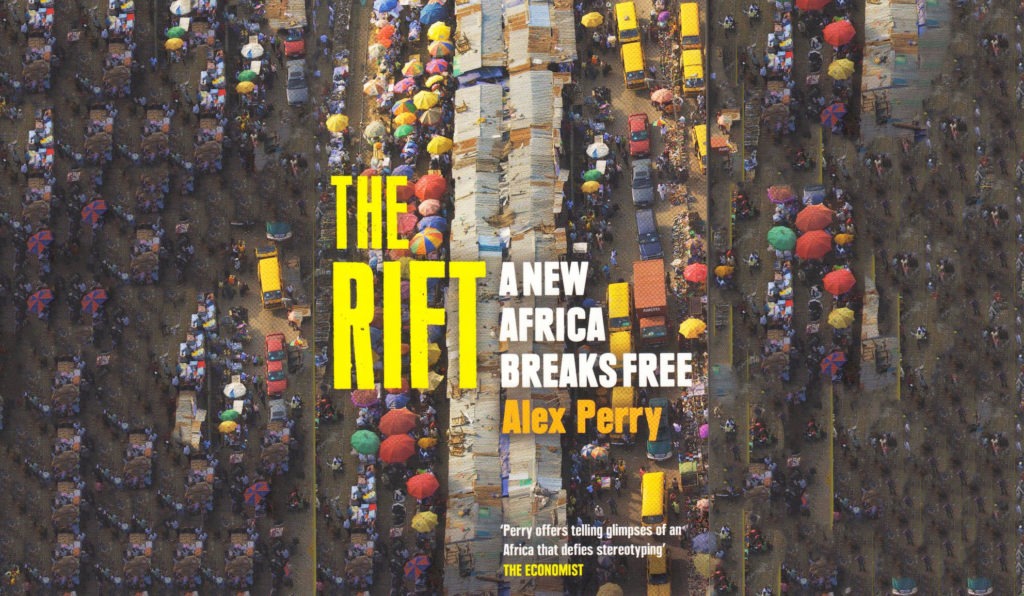 He enthusiastically hails Africa’s growth path and rollback of poverty, noting: “By 2050, a typical African country like Zambia can reasonably expect to be, at worst, Poland, and at best, South Korea.”

This is not, however, sunshine journalism of the sort in which adulation of Africa’s economic growth eclipses the real lives of the people who generate it.

In his decade as TIME magazine’s Africa bureau chief, Perry lived in colonial-era splendour on the slopes of Constantia in Cape Town. But he was explicitly aware that travelling downhill would see him cross the “unmoving and bitter gradations” of the world’s widest colour and class divide.

And he initiates his book in Mogadishu, the fairest Cape’s polar opposite, a “monochrome, tropical Dresden” during the 2006 Ethiopian invasion. Where many foreign observers of Africa project their own desires and distortions onto the continent, Perry, acutely aware of his position as an outsider, listens to Africans speak, and in doing so appears to truly see.

It is unfortunate that he is compelled to include an entire chapter on Africa’s prehistoric to colonial past. But the necessity of doing so is underlined by the Pulitzer Prize granted to New York Times east Africa bureau chief Jeffrey Gettleman in 2011 for his writings about Africa that were the exact opposite of Perry’s.

As Prof Laura Seay of Colby College, who writes on Africa for the likes of The Atlantic and Foreign Policy, put it in a scathing article, “Gettleman’s writing was often the worst of parachute journalism”.

She accused him of “lazy and reductionist assessments” of complex African conflicts and, perhaps worst of all, “the near-total absence of meaningful African characters … who are most often one-dimensional objects of pity, Gettleman’s employees, or simply part of the background scenery.”

In July 1541, de Castanhoso accompanied the military expedition of Vasco da Gama’s son, Cristóvão, from Massawa on the Red Sea to aid Ethiopian emperor Gelawdewos against a Somali invasion.

Castanhoso “infantilised Africans” in support of an expedition founded on naked commercial greed, religious bigotry and an almost complete disinterest in African’s collective ubuntu civilisation, marking a European “age of discovery” that Perry characterises as “discovery of a most incurious kind”.

He, instead, foregrounds Africans in their own right, fully possessed of their own agency and ingenuity, whether talking about Malian Emperor Abubakari II’s epic thousand-ship expedition west in 1311 in search of South America – a full century before Christopher Columbus’s three-ship journey to the West Indies – or interviewing a Somali pirate called Fingers about his own seafaring exploits.

Those necessary correctives aside, Perry uses them not merely as backdrops but to explain the direct line of descent of colonial-era prejudices about Africa to the ideologies of today’s “three ruling groups” on the continent, which he writes are linked by “ignorance and hypocrisy” – “aid workers, despots and jihadis”.

Perry is unflinching in his criticism of this triumvirate. He notes that the aid barons in their glass towers in New York and Geneva fret that Africa’s rising good fortune undermines their aid industry – at $57,1 billion “the biggest business on the continent” – while their tens of thousands of minions on the ground in Africa live in air-conditioned enclaves in which they barely interact with the millions they are allegedly saving.

Accompanied by South Sudanese journalist Mading Ngor, he visits such an enclave in the civil war-devastated regional capital of Malakal. In a city reduced to ashes, he interviews survivor Ernest Uruar, 52, who tells Perry that for two terrible months, the Nuer rebels – after shooting Dinka patients in the hospital and razing the city to the ground – had used the female refugees holed up in the local cathedral as a rape pool. The cathedral is a mere 10 minutes’ drive from the UN “peacekeeper” base and they never once intervened.

Perry witnesses the UN’s total unwillingness to dirty its hands in protecting civilians in eastern Democratic Republic of Congo (DRC). Shades of a repeat of the UN inaction during the Rwandan Genocide hang like a dirty pall. But then this is the journalist who plainly called the famine in southern Somalia in 2011, which he witnessed in all its skeletal horror, a “war-crime”.

It was, he stresses, knowingly committed by the USA, with accomplices such as Oxfam, via the imposition of a food-aid blockade, starving 258,000 civilians to death to supposedly punish a few thousand Al-Shabaab fighters.

Perry is a very angry man, but his words are tempered as steel. Always keen to trace the roots of a phenomenon, he dates the rise of the modern humanitarian-financial complex to the 1967-8 secessionist Biafran war against Nigeria, when many of today’s most powerful aid agencies – UNICEF, Save the Children, Caritas and Médicins sans Frontières – gained their first field experience. Humanitarianism became, he argues, the new imperialism, with a “civilising” mission that overrode national sovereignty and increasingly looked to military solutions.

The humanitarians have, he contends, a worrying tendency – like their colonial predecessors in Africa – to side with Christians against Muslims in conflicts. And this he dates back to medieval clashes between the faiths along the line of the Sahel.

Unlike Europe – where this confessional clash ended with the expulsion of the Moors from Andalucia in 1492, only to be resumed in 2005 with the Islamist bombing of a train in Madrid – in Africa, he argues, the conflict has remained unbroken. And has been complicated by the fact that jihadis were often leading anti-colonial heroes.

He further explores the nuances of the liberation hero as villain in the personas of Robert Mugabe and Jacob Zuma. But while he gives Mugabe significant leeway for the justice of his anti-colonial, land-redistributive motivations, he gives Zuma short shrift for continuing the ANC’s struggle-era connivance with criminal syndicates to build today’s murderous and venal kleptocracy.

Perry examines the challenges of the emerging Africa and gives Rwanda’s Paul Kagame extensive treatment. While he critiques Kagame’s sang-froid about killing his enemies, he is charmed by the drive of a man who roused a phoenix from the ashes of the genocide.

Rwanda boasts the highest female representation of any country on earth, its cabinet ministers are required to sweep public streets once a month – streets that lack potholes – and the country is only a few months shy of inaugurating a new high-speed rail link from Kigali to Mombasa.

But a more important hero is Burkinabé farmer Yacouba Sawadongo, who in the early 1980s invented a method of re-greening the desert. Sawadongo really should be given the Nobel peace prize: his idea caught on.

By 2004, Perry writes, 300,000 hectares had been re-greened in Burkina Faso, five million in Niger, one million in Ethiopia, and 450,000 in Mali: “More than five million people were farming themselves out of starvation”. Bear in mind that over the past three decades the only famine in the Sahel – in Somalia in 2011 – was man-made.

The new fields and forests have not only reduced hunger; they have also increased rainfall, lowered temperatures and improved African community autonomy – thus reducing the rationale for foreign aid, parasitic leadership and desperado terror groups.

From its tech entrepreneurs to the space programmes of several nations, Perry tracks a “New Africa” that is defying stereotype, largely by becoming self-reliant, and charting its own course on its own terms. 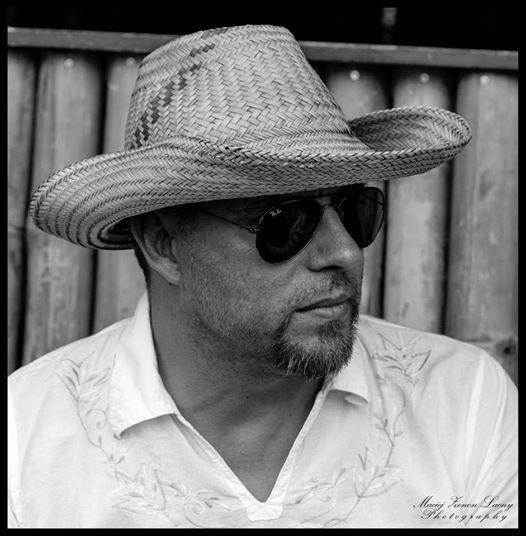 MICHAEL SCHMIDT is a field reporter who has worked in 45 countries across six continents, but with a focus on Africa. He is the author of five books including Drinking With Ghosts (2014). He is a 2009 academic leader at Tecnológico de Monterrey (Mexico), a 2011 Clive Menell Media Fellow at Duke University (USA), and a 2017 Arts Rights Justice Academy Fellow at Universität Hildesheim (Germany). He researches and writes on African affairs and continental human rights. IMAGE © Maciej Lacny 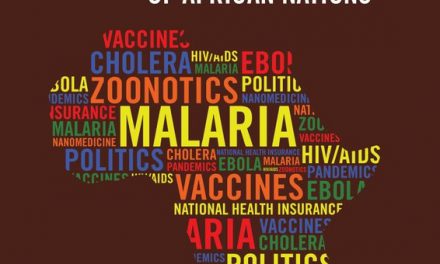 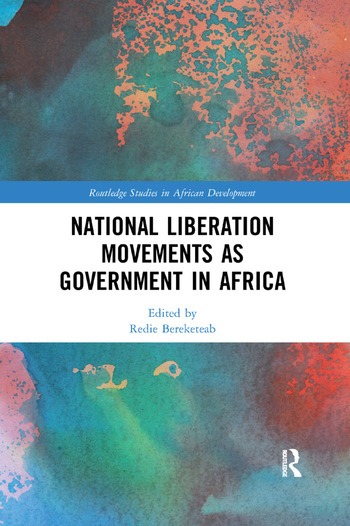