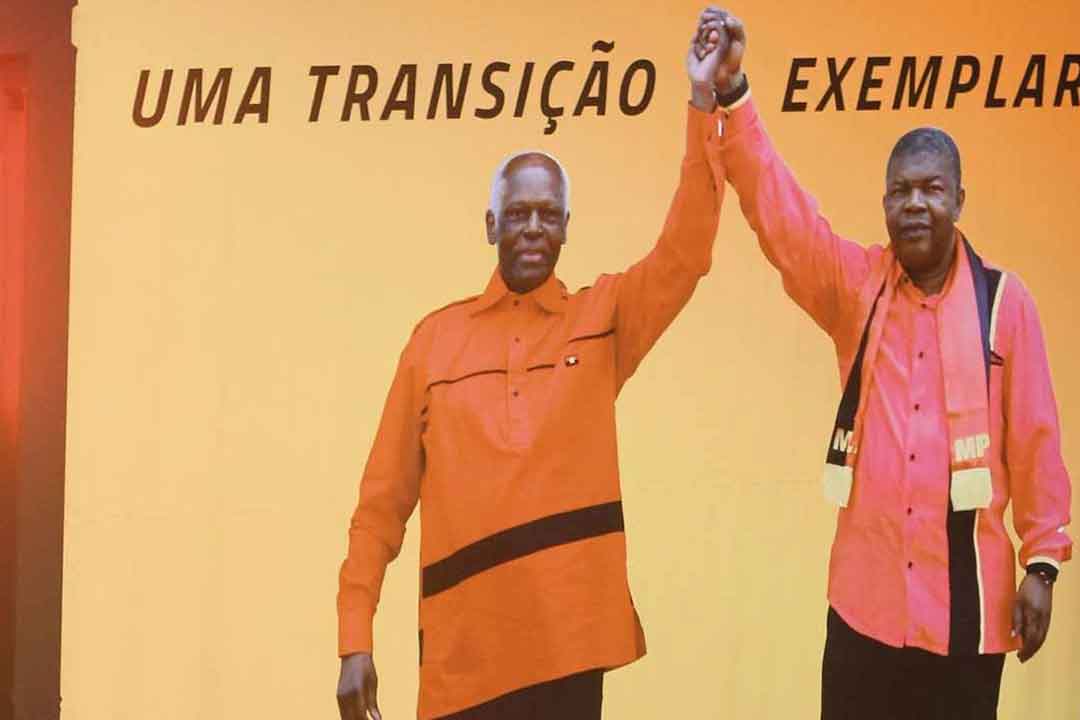 Angola’s President Joăo Lourenço (right) and the former president, Jose Eduardo Dos Santos (left), at a party extraordinary congress on 8 September, 2018 in the capital, Luanda. The former president  handed over the reins of the ruling MPLA party to Lourenço after dominating politics for nearly four decades. Photo: Ampe Rogerio/AFP via Getty Images

Joăo Lourenço largely proved critics wrong after coming to power as Angola’s second post-civil war leader in 2017. As José Eduardo dos Santos’ preferred successor, it seemed unlikely the new leader would introduce reforms that could affect the interests of his benefactor. Dos Santos had run the oil and diamond-rich nation for 38 years while aggrandising the first family and suppressing dissent.

After being sworn in, Lourenço replaced Dos Santos’s influential daughter, Isabel, reputed to be Africa’s richest woman, as the head of the state-owned oil company, Sonangol. He fired José Filomeno, Dos Santos’s son, as the administrator of the country’s sovereign wealth fund.

The government recovered more than $5 billion in looted assets and introduced an anti-graft law. It acquitted journalists facing trial and relaxed state control of the media. Lourenço reached out to political opponents and reorganised the ruling Movimento Popular de Libertação de Angola, MPLA.

But the momentum of these reforms has slowed in the past two years, and so has public optimism. The government’s response to corruption has been less spirited, analysts say. Attacks on dissent have not stopped, and the government has yet to allow the conduct of the country’s first-ever local government elections that were expected to lead to decentralisation of power.

This may appear as the trademark behaviour of a resource-rich African nation, but it also points to something more fundamental in Angola: while the president has been applauded for trying to wrench the dos Santos clan off state assets, the country’s repressive political system, orchestrated and perfected by the MPLA for decades of the country’s independence struggle and civil war, has not entirely changed.

“Angola’s politics and economy remain dominated by a national liberation movement (NLM) in government, the MPLA, and its senior figures,” Christopher Vandome, a research fellow with the Chatham House Africa Programme, told Africa in Fact. “Like other NLMs in southern Africa, the MPLA views its accession to power as the end of a process, and this sense of finality supports a belief that no other group can succeed them.”

The MPLA’s illiberal approach has a long history beginning from the days of Angola’s struggle for independence from Portugal. Under the party’s central Marxism-Leninist ideology, political competition was not welcome, and ideological opposition was brutally repressed.

After war broke out against its main opposition, União Nacional para a Independência Total de Angola (UNITA), MPLA cemented its position in power through the control of the oil economy. The opposition also took advantage of its access to the country’s diamonds to sustain its fight for 27 years.

“Through the control of the state and the oil revenues on which it depended, the MPLA centralised control of Angola’s economy to the benefit of the party,” said Vandome, who focuses on the political economy and international relations of southern Africa.

In 1991, 12 years after he came to power, dos Santos tried to dismantle the single-party system as part of accords to end the war. This failed and hostilities resumed.

Since the war ended in 2002 following the death of the UNITA leader, Jonas Savimbi, Angola has seen increasing popular demands for greater political and economic opportunities, especially from its young population, and the political leadership of the country has oscillated between meeting these agitations by allowing reforms and suppressing them.

Since coming to power, Lourenço has opened up the polity and the economy. Angola now has a privatisation law, a one-stop window for investors, and a social protection registry to take care of the most vulnerable citizens. The new president has tried to steer the nation away from the neo-patrimonial system of the Dos Santos era, where power was exercised through patronage and enrichment. But Lourenço has also retained the MPLA’s culture of dominance.

“President dos Santos was consistent in his support for the political status quo, a stance continued after the accession of the current president, Joăo Lourenço,” Steven Kyle, an associate professor at New York’s Cornell University, who has conducted several studies on the economic policies of Angola and other Portuguese-speaking African countries, told Africa in Fact.

Perhaps no two cases explain the “political status quo” better than the government’s continued failure to allow local government elections for the first time in Angola’s history, and its continued attack on civil liberties.

Although it has four levels of government – national, provincial, municipal, and district – Angola is the only southern African nation without an elected system of sub-national government.

The president appoints the 18 provincial governors, who appoint the 164 municipal administrators, who in turn appoint the 475 administrators of the districts. This arrangement means the central government in Luanda effectively appoints all top officials at lower levels of government.

As a result, the appointees’ loyalty is not to the people, but all the way up to the president. Politically, the system allows the MPLA, which has been in power for decades, to fill all senior posts. 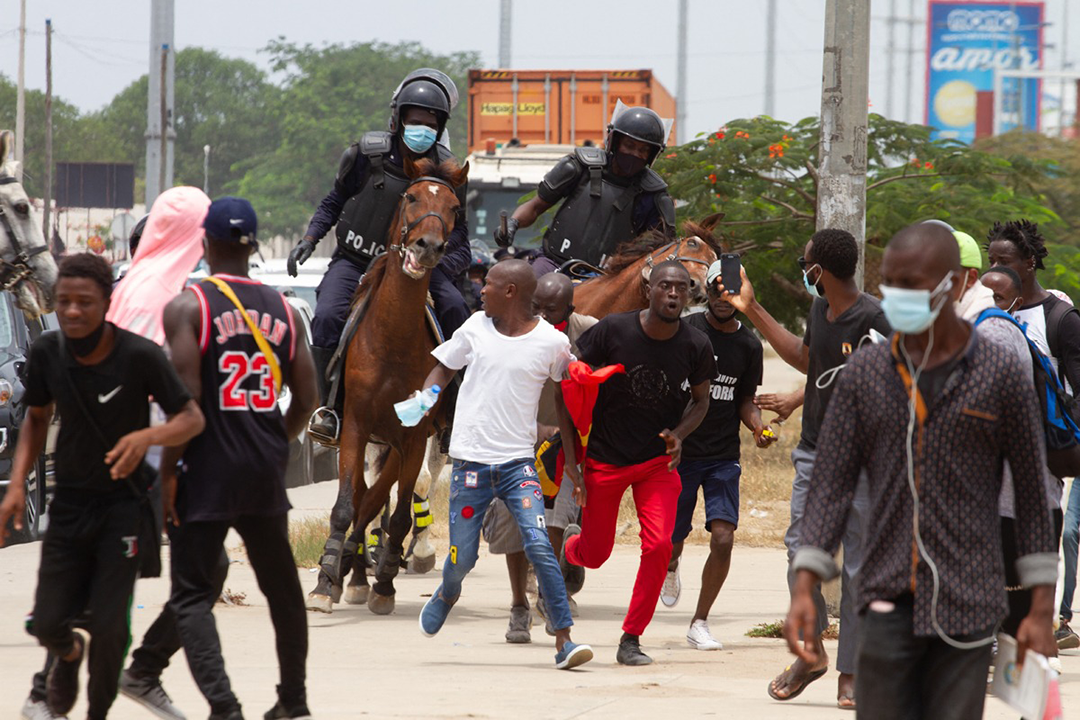 Demonstrators run away from mounted Angolan police officers in Luanda on 4 February, 2021 during a demonstration against police brutality, days after several separatists were killed in a thwarted protest in the country’s northeast. Photo: Osvaldo Silva/AFP

Elections would see the ruling party lose its control over sub-national governments, and officials have changed timelines for achieving an election for years. After repeatedly shifting the dates, President Lourenço promised the elections would be held in 2020. The government now blames COVID-19 for moving the dates yet again, but many do not believe the government has been sincere. They point to the fact that even without the pandemic, local government elections would not have happened in 2020 because the National Assembly went on break without approving the necessary legal framework.

“It is part of a deliberate delaying strategy by the ruling party to maintain a system where the central government appoints all officials at sub-national levels,” says Albano Troco, a post-doctoral research fellow at the University of the Witwatersrand, in an article, ‘Why COVID-19 can’t be blamed for Angola’s failure to have local governance’, published in August 2020, on The Conversation. “The introduction of local elections would see the ruling party lose its monopoly over the local government for the first time since independence.”

The second point is just as telling. Although Lourenço has made efforts to reach out to the opposition, his government’s response to dissent remains troubling, human rights groups say. This attitude follows from years of the brutal curtailment of open expression of political dissent, a notorious past underlined by the 1991 killing of 10,000 to 30,000 people in what became known as the Halloween Massacre.

As recently as 18 January this year, security officials killed several separatists protesting in the country’s north-east diamond mining town of Cafunfo, in Luanda Norte province, according to an Agence France Presse (AFP) report.

The report said police claimed the officers had acted in self-defence after around 300 armed protesters assaulted the Cafunfo police station, but video footage of the incident circulated on Twitter showed military and police officers standing over a dozen unarmed bodies in broad daylight.

According to AFP, a senior Human Rights Watch researcher, Zenaida Machado, who shared the video said it was sent to her directly by a police officer at the scene. Machado said decades of the police’s notoriously violent attitude towards demonstrations had remained the same under Lourenço.

This manner of excessive control of all aspects of the economy and society by a single party can only lead to the creation and consolidation of “self-reproduction systems and mechanisms, which in turn easily build hardly scrutinised processes of management of resources, and facilitate corruption,” says Cristina Rodrigues, senior researcher on Angola and Portuguese speaking Africa, at the Nordic Africa Institute, Sweden.

With growing demands for more opportunities and livelihoods in Angola, the government’s priorities must be to deliver modernising reforms that can diversify the country away from oil dependence and unravel deep-rooted patronage networks, Vandome said.

Kyle agrees, but argues that while it is certainly possible for the MPLA to chart a “radically different course”, it is unlikely “given the intense pressure on the party to satisfy numerous competing demands”. 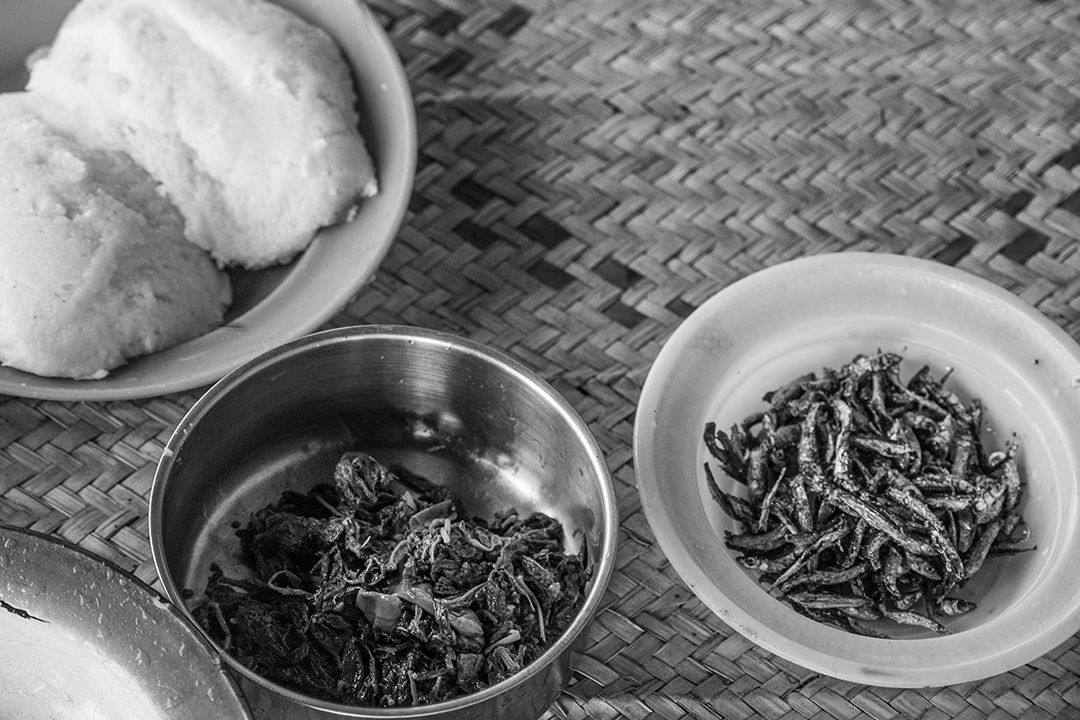